Cheap and Easy, and You Can Still Show Your Mother! (DIY Lego Costume for Dogs)


﻿ ﻿
Last Sunday, I went to a fundraising event for some local animal shelters, and on the agenda was a pet costume contest.  I decided go go Friday night, when I was in a hurry and broke.  As I strolled the aisles of the local craft store, praying for inspiration, I remembered this image from Pinterest:

Cardboard box and Solo cups?  Easy and cheap.  But not flexible for wigglesome dogs like Prada.

But have no fear, for I came up with a solution:  sheets of craft foam, the top of a shoe box, and foam can holders.  Everything but the shoe box (which I had because I have a shoe problem) was in the same aisle--the sheets were $.79 each (I bought two) and the can holders were a buck a piece (I bought two).

I did not take photos as I went along, because I was in a hurry.  (And because my place is a mess.)

Step 1:  Cut a U-shape into one end of the shoe box (or whatever box is roughly as long as your dog, shoulder-to-tail.)  This gives room for their neck.  You will end up cutting off the head end side of the box lid entirely, but that's okay.  You just need something to give a little bit of firmness to the top and sides of the Lego to hold the craft foam in shape.

Step 2:  Cover the top of the box with craft foam.  I used glue dots because I was in a hurry, but I plan on going over it again with proper glue.  Aleene's (maker of the famous craft-glue-in-a-gold-bottle) makes an adhesive to use specifically on craft foam, though I understand hot glue and white glue also work.

Step 3:  Cut a small slit in both sides of the box lid, right about where your dog's "armpit" is.

Step 4:  Cut craft foam to cover the sides and back of the shoe box, extending down to cover your dog's side.  Don't glue around the slit you cut, though...  (I realized later I should have duct-taped the insides together, connecting the back panel the the side panels, fyi.)

Step 5:  Cut a U-shape into the back end to leave room for the butt/tail.

Step 6:  Trim the can holders down to Lego-peg-appropriate height.  I cut them basically in half to be in proportion with a Prada-sized Lego.

Step 7:  Cut circles in the craft foam sheet to cover the top of the Lego-pegs/bottom of the can holders.  There was a little hole.  And I'm finicky.

Step 8:  Glue the pegs onto the Lego box.

Step 9:  Pass a ribbon/string/whatever through the slits on either side of the box.  They shouldn't be visible under the craft foam.  I used velcro straps, which worked really well.  I just looped them around Prada's harness.

And that's it!  It's easier than it sounds, I promise--it took me around fifteen minutes, and turned out well enough that Prada won the contest.  Not bad for less than five bucks! 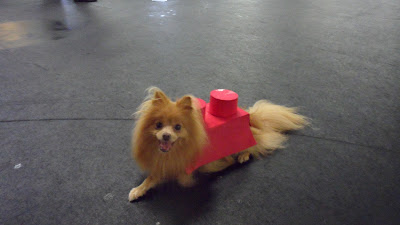 Best of all, Prada wore it for about three hours with no problems--the craft foam kept it lightweight and flexible.


(True:  Has anyone else seen that chia pet costume on Pinterest?  If I'd had more time...)
Posted by Dana the Biped at 1:13 PM

Email ThisBlogThis!Share to TwitterShare to FacebookShare to Pinterest
Labels: Badass DIY is the Only Kind I Do, I Could Totally Take Martha Stewart in Thumb Wrestling, Nerd-Alert, Prada the Puff

Dana the Biped
My hometown has 30 people, one intersection, a defunct church, and a very not-defunct bar. And now I live in Chicago. Email me at danathebiped@gmx.com! (I also Twit: forghetti). I reply to all comments with more comments! (So, come on, give a girl some love...)